To share your memory on the wall of JANET TILLY, sign in using one of the following options:

Janet was born April 7, 1942 in Negaunee, to Robert and Sylvia (Johnson) Young and graduated from Negaunee High School, Class of 1960. Janet worked as a nurse’s aide at both St. Mary’s Hospital in Marquette and Marquette General Hospital, later moving into housekeeping at Marquette General.

Mrs. Tilly was a previous member of Calvary Baptist Church, Negaunee. In her spare time, she enjoyed playing Yahtzee with her dear friends, Sue Marshall and Nancy Hakkarainen, listening to her scanner, gathering with her Everett Street friends for a chat and dessert, and taking an occasional trip to the casino. Above all, Janet cherished time with her family, especially her beloved grandchildren. She took great pride in giving them a loving and generous Christmas, and never forgot a holiday or birthday.

She was preceded in death by her parents; her husband, Milton ‘Tony’ Tilly in 1992; and a brother, Kenneth Young.

Honoring Janet’s wishes, no public services will be held. Interment will be held in Northland Chapel Gardens.

There are no events scheduled. You can still show your support by sending flowers directly to the family, or planting a memorial tree in memory of JANET M. TILLY (Young).
Plant a Tree

We encourage you to share your most beloved memories of JANET here, so that the family and other loved ones can always see it. You can upload cherished photographs, or share your favorite stories, and can even comment on those shared by others.

Plant a Tree in Memory of JANET
Plant a tree
0 trees have been planted in memory of JANET M. TILLY (Young)
LF

Posted Feb 16, 2021 at 07:43pm
Worked at Marquette General decades ago and now live out West but remember Tilly could always be counted on and was held in high esteem and affection
Comment Share
Share via:
MB

Posted Feb 12, 2021 at 04:59pm
I was a housekeeping supervisor at MGH for 13 years, and worked with Jan.I always enjoyed her warm personality and great work attitude.I was very saddened to read of her passing, and wish God.s blessings on her family..
Comment Share
Share via:
TW

Posted Feb 11, 2021 at 09:23am
I worked with Tilly at St Marys rehab unit for a few years. I really enjoyed her and her wonderful smile and laugh! From time to time we would run in to each other and always promise to catch soon over lunch------that never happened and I regret that alot. It is one of those I wish I would have tried harder things. Tilly was a friend and she will be missed. My Lord is enjoying her today.
Love and prayers to Tilly's family. Terrlyn Wright
Comment Share
Share via:

Posted Feb 07, 2021 at 03:09pm
I always loved Jan when I still worked on the Cardiac Unit at MGH. She was so kind, even though her life was tragic. She always kept a picture of her late husband at her work area. She was a hard worker, and a wonderful and kind person. I remember the Christmas when a group of us went to her apartment and set up a Christmas tree and decorated her place, as she was feeling so blue she wasn't going to do anything to celebrate. We brought food, and cheer, and she was SO surprised, she cried. It was wonderful to see her so happy.
Comment Share
Share via:
CH

I'm so sorry to hear of your loss. I knew the Tilly family when I first moved to the UP in 1973. Spent many days with family. I moved & lost touch with family. Never forgot Jan & her kindness. Again, so sorry for your loss. 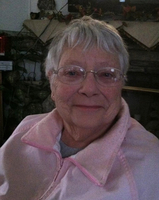