To share your memory on the wall of DOLORES PINKERTON, sign in using one of the following options:

Provide comfort for the family of DOLORES PINKERTON with a meaningful gesture of sympathy.

Margene was born March 19, 1935 in Escanaba to John and Mari... Read More
Dolores Margene (Ruesing) Pinkerton, 84, of Red Fox Trail, Marquette, passed away unexpectedly on Friday, August 23, 2019 in Bozeman, Montana while vacationing with her family.

Margene was born March 19, 1935 in Escanaba to John and Marion (Denofrio) Ruesing and graduated from Negaunee St. Paul High School. She was united in marriage to the late Clarence ‘Bud’ Pinkerton and was a devoted wife, mother and homemaker.

Mrs. Pinkerton was a devout member of St. Paul Catholic Church, Negaunee and St. Francis of Assisi in Englewood, Florida. She also belonged to the Paisano Club and the Lady Red Hats. Margene enjoyed sailing, fishing and camping with her husband, gardening, and cooking and baking. Most importantly, she cherished her time spent with family, especially her grandchildren who she loved dearly.

She was preceded in death by her parents, Francis and Marion Conway; and her husband, Clarence ‘Bud’ Pinkerton on May 1, 2018.

A Mass of Christian Burial will be celebrated at 11:00 am on Friday, August 30th at St. Paul Catholic Church with Rev. Larry Van Damme officiating. Burial will be in the Negaunee Cemetery. The family will greet relatives and friends from 10:00 am until the time of Mass at 11:00 am at the church on Friday, and also at a luncheon in the St. Paul Gymnasium following services. Pallbearers will be Michael B. Pinkerton, Jacob Pinkerton, Andrew Schroeder, Michael T. Pinkerton and David Van Driel. In lieu of flowers, memorial contributions may be directed in Margene’s memory to St. Paul Catholic Church.

We encourage you to share your most beloved memories of DOLORES here, so that the family and other loved ones can always see it. You can upload cherished photographs, or share your favorite stories, and can even comment on those shared by others.

Al Denofre and family, Susan Mosely and Family, and others have sent flowers to the family of DOLORES MARGENE PINKERTON (Ruesing).
Show you care by sending flowers

Posted Aug 29, 2019 at 08:52pm
The Pinkerton Family - we knew Marge from Wildflower and she will be greatly missed. So sorry for your loss. Our deepest sympathy.
Comment Share
Share via:
EN

Posted Aug 29, 2019 at 08:50pm
The Pinkerton Family:
We're residents of Wildflower in Florida where we met Marge and your Dad. So sorry for your loss, she was a wonderful person and will be missed when we arrive in Florida.
Comment Share
Share via:
AF

The FTD Vibrant Sympathy Planter was purchased for the family of DOLORES PINKERTON. Send Flowers

Posted Aug 29, 2019 at 08:34am
Wishing you peace to bring comfort, courage to face the days ahead and loving memories to forever hold in your hearts. 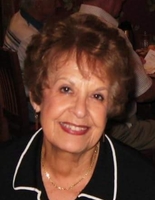