To share your memory on the wall of ROLLIN JOHNSON, sign in using one of the following options:

Provide comfort for the family of ROLLIN JOHNSON with a meaningful gesture of sympathy.

Ruffy was born April 8, 1934 in Negaunee to Carl and Anna (Matta) Johnson and graduated from Negaunee High School, Class of 1951. Upon graduation, he enlisted in the United States Navy, serving during the Korean War aboard the destroyer U.S.S. Beale.

Following his service to his country, Ruffy worked at K.I. Sawyer and for the U.S. Post Office in Negaunee before beginning his career as an assistant state service officer with the Department of Michigan Veterans of Foreign Wars in 1988. He began in Detroit and was transferred back to the U.P. in 1992 where he assisted across the entire Upper Peninsula. He was a fighter for veterans, served above his call of duty by attending every possible convention and meeting, and was instrumental in creating a program to name a U.P. Veteran of the Year.

Mr. Johnson was a lifetime member of V.A. Romo Post #3165, Negaunee VFW, where he held many positions including post commander in 1980-81 and 14th District Commander. He was also a member of the Disabled American Veterans and the Odd Fellows Lodge, Ishpeming. Aside from his many work and civic duties, Ruffy enjoyed gardening, hunting, playing softball for the Negaunee Old Timers, and entertaining. Most importantly, he was a family man. Ruffy loved spending time with his grandchildren and great-grandchildren.

He was preceded in death by his parents; brother, Carl Johnson; three sisters: Marion Grell, Myrtle Dompierre and Shirley Gleason; and his brother-in-law, Donald Nankervis.

Funeral services will be held at 1:00 pm on Friday, January 24th at Bethany Lutheran Church in Negaunee with Michael Holman officiating. The family will greet relatives and friends from 11:00 am until the time of services at 1:00 pm at the church on Friday, and also at a luncheon in the church hall immediately following services. Pallbearers will be Russell Williams, Nathan Johnson, Greg Larson, Brad LaFreniere, Kim Hocking and Shon Johnson. Interment will take place in the Ishpeming Cemetery. In lieu of flowers, memorial contributions may be directed in Ruffy’s memory to the Negaunee VFW or the DJ Jacobetti Home for Veterans Activity Fund.

The Johnson family extends a special thank you to the nursing staff at Eastwood for their wonderful care provided.

Ruffy’s memorial page may be viewed at koskeyfuneralhome.com
Read Less

We encourage you to share your most beloved memories of ROLLIN here, so that the family and other loved ones can always see it. You can upload cherished photographs, or share your favorite stories, and can even comment on those shared by others.

Posted Jan 23, 2020 at 05:31pm
Please accept our most heartfelt sympathies for your loss... Our thoughts and prayers are with you and your family during this difficult time.

Posted Jan 23, 2020 at 01:22pm
Doreen and family,
Please accept Christine and my sincere condolences in the loss of a great human being. He was a wonderful Service Officer and an advocate for every veteran.
We had so many good times while I was in the UP especially while he was driving in the winter. White knucklers all the time for me. It didn’t faze Ruffy. He got me my Green Card!
Rest in Peace my friend.
Dan and Christine Crocker, VFW
Comment Share
Share via:
DA

Posted Jan 22, 2020 at 07:57pm
My dearest sympathy goes out to Mr. Rollin " Ruffy " Johnson family , relatives and friends . Ruffy was a Veteran Benefits Coordinator at The D.J. Jacobetti Home For Veterans , there is where I got to know Ruffy because I retired from there to . Ruffy would like to start his shift by having a cup of coffee I made . He would always say thank God for Randy's coffee . He was a life member of Negaunee 's V.F.W. and he did so much for our Veterans . Everyone that knew Ruffy will dearly miss him . Randy Saatio Life member of Am/ Vets , Ordained Minister and A friend to all Military Veterans .
Comment Share
Share via: 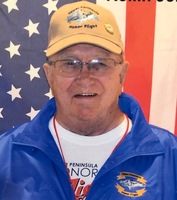