To share your memory on the wall of PATRICIA PAQUETTE, sign in using one of the following options:

Pat was born April 28, 1929 in Kingsford, Michigan to Hugo and Effie (Simonson) Ohmen. She was always proud of her talented parents who were once professional singers and dancers who sang and danced their way across North America in a 1920’s traveling show. It was while they were on the road together that they got married in New York. When the treasure of their life, “Little Patsy” was on the way, they left show business and became a family here in the UP in the town of Iron Mountain where Pat’s Swedish-Finnish Ohmen grandparents had emigrated to from Finland and raised their own family. Combined with her mother Effie’s Irish inner fire, Pat was the very definition of GREEN SISU.

Pat graduated from Iron Mountain High School in 1947 where she excelled academically in class. She enjoyed skating, skiing and ski jumping as a youngster (Yup, she was a Tomboy when she was growing up, although she was not allowed to date any of the boys she hung around with until she turned 16!), going to the movies all the time, dancing and acting on stage, playing cribbage with her dad, word puzzles, and most of all, playing the clarinet in the IM Junior High and High School bands. Again, she excelled as a musician.

Pat grew up being the sole child of Hugo and Effie, but was also the only little girl in her extended family in Iron Mountain, so her aunts and uncles spoiled her. Her own family was of meager means (they never owned a car or a house), but she never wanted for anything because of the love and generosity that her entire family had for her and for each other. It was a lesson about the vast importance of love of family that she never ever forgot, and lived her entire life.

While going to high school at age 15 in 1944, she met the “love of her life,” Bob Paquette from Kingsford. She was at the bowling alley with her teenage friends when in the door walked the handsome and hunky Bob Paquette in his new Navy uniform, getting ready to ship off to the South Pacific. He struck up an awkward conversation with Pat and then walked her home later that night. She faked what house she was living in so that her mom wouldn’t “catch her” walking home with an “older boy in uniform.” It all worked out well, and when he returned from WW2 when she was 17, they dated (mostly on fishing dates on the Menominee River) and the rest was history after Bob proposed to her—yup--while fishing.

Bob’s two very best friends Eugene Farrington and Howard “Buster” Kopp also proposed at that time to Pat’s own closest two friends Doris Mariucci and Lois Oien and they all eventually got married. Pat and Bob married in Iron Mountain on September 23, 1950. Shortly thereafter, they moved to the Ishpeming and Negaunee area where they raised five children, David, Jim, Ray, Karen, and Barbara. Pat and Bob remained happily married for 64 years until his passing in January of 2014.

Pat worked at numerous jobs throughout her life, and retired after many years of service as the Parish Secretary at St. Paul Catholic parish in Negaunee. Her faith in God and her religion was of the utmost importance to her. She was a longtime member of the St. Paul Altar Society, worked for several years in the St. Paul school kitchen, and lived her dream of being a fine singer like her mom and dad as she sang for many years in the St. Paul Concert Choir as a tenor.

Pat was well-known as being a fierce competitor in all that she did. She taught her kids cribbage but never let them win. Unlike the whole rest of her Packer fan family, she was an avid Lions fan right to the end. She loved playing golf, and on the very last day of her life, her family sat with her at Eastwood watching her all-time favorite golfer Tiger Woods come back from adversity and win the 2019 Masters. Pat played cribbage for many years for the Negaunee VFW with her partner Connie Williams and bowled in the local women’s leagues from 1963 through 2006. Pat was also the founder of the Ishpeming/Negaunee Women’s Horseshoe League back in 1972. She was an outstanding horseshoe player, having won the Women’s Upper Peninsula Horseshoe Championship that same year. She anchored numerous Olympia and Tino’s Bar league championship teams with her daughter-in-law, Karen (Kantola) Paquette. Pat was a life-long member of the VA Romo Post #3165, Negaunee VFW Auxiliary, being the proud wife of a WW2 veteran.

Pat was notorious for giving away anything that she had to someone else who she felt needed it more than she did. She donated unknown amounts of her hard earned money to the missions, to St. Jude’s and to anyone who asked for her help. Eventually her mail box was stuffed every single day with incoming envelopes from everyone who needed a buck. And she always replied.

More than anything, Pat was dedicated to her family and to her dear friends, of which there were many. Being an only child, she was always so very happy to have raised her own large family and to have also felt the love of friendship from other kind and wonderful people too numerous to mention. As a mom, she was truly God’s example of the perfect mother. Her children were always utmost on her mind everyday of her long life. Her unconditional love of her children was likewise shared by her with her many grandchildren and great grandchildren.

Pat was preceded in death by her parents; her husband Bob; her son, Ray; and two granddaughters, Katie Paquette and Emily Dishaw.

A Mass of Christian Burial will be celebrated at 4:00 pm on Wednesday, April 17th at St. Paul Catholic Church in Negaunee with Father Larry VanDamme officiating. The family will greet relatives and friends from 2:00 pm until the time of Mass at 4:00 pm, and also at a reception following the service at the St. Paul Parish gym. In lieu of flowers, memorial contributions may be directed in Pat’s memory to the Eastwood Nursing Center Activity Fund or to St. Paul Parish.

Pat’s family would like to express their sincere and heartfelt gratitude to the wonderful and caring staff at Eastwood Nursing Center. They were all indeed, to a person, true angels in our mom’s late life.

Pat’s memorial page may be viewed at koskeyfuneralhome.com.
Read Less

To send flowers to the family or plant a tree in memory of PATRICIA G. PAQUETTE, please visit our Heartfelt Sympathies Store.

We encourage you to share your most beloved memories of PATRICIA here, so that the family and other loved ones can always see it. You can upload cherished photographs, or share your favorite stories, and can even comment on those shared by others.

The Alan Kantola Family sent flowers to the family of PATRICIA G. PAQUETTE.
Show you care by sending flowers

Posted Apr 17, 2019 at 02:12pm
Dear Barb, Karen and all the Paquette family,
Please accept my condolences for your loss.
Chris Ghiardi
Comment Share
Share via:
BS

Posted Apr 17, 2019 at 09:03am
I have known Pat since I was a kid in school. Because she worked at the church and I was in the folk group, we saw each other often. In later years, she became a part of my extended family. She was always kind and generous to me. Maybe it was because we had a lot in common, being tomboys and loving music so much. However, I’m sure it was just because she was Pat and that’s how she treated people. I’m glad to have been able to see her frequently in this past year. She was a joy to visit with. Her work here is done & a new journey has just begun. Prayers for the family. I hope you find comfort in all the wonderful memories of a loving mother.
Comment Share
Share via:
JM

Posted Apr 17, 2019 at 12:04am
I had the pleasure of meeting your mom while visiting my friend Margaret at Eastwood. I asked her if I could get her something to drink as she was sitting at our table in the dining room. She came back with "yes, a Manhatten!" I said "you and me both Pat". She was a delightful gal. Our thoughts and prayers are with you all at this difficult time. Jane and Mike Mariuzza
Comment Share
Share via:
TF 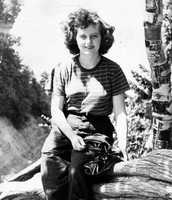