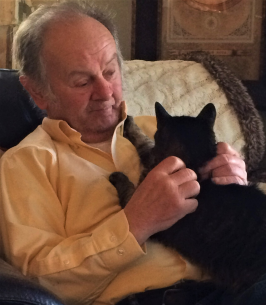 Carl John Ritari, Jr., 78, of Marquette, passed away peacefully Saturday morning, September 10, 2022, at Mill Creek Memory Care after a very lengthy illness, with Peggy and Penne at his side.

Carl was born December 5, 1943, in Ishpeming to Carl and Helen (Penhale) Ritari, Sr., and was raised in Trowbridge Park in Marquette Township. He served in the United States Marine Corp from 1962 until his honorable discharge in 1965. He was a proud supporter of Tunnels to Towers. Carl worked as a diesel mechanic at several shops and for many years from his oversized garage, and prior to retiring as a member of Operating Engineers 324 for Lindberg and Sons, Inc.

In his prime he was referred to as “The god of diesel” a title that made him smile. In his spare time, he enjoyed cars, engines, welding, woodworking, building, gambling, and driving his special corvette. He took his last ride in it on Monday with Penne telling her, “you drive like a girl” and asked “Where’s Jamme.” He got his final real ride with Jamme in his prized car, obviously lighting them up and speeding as he came back giggling.

He was preceded in death by his parents; his beloved first wife, Doris (Harris) Ritari; step-son, Jeff Virta; his sisters: Sheila Malvasio, Gretchen Ritari and Juanita Mattson; and his brother, Robert Ritari.

Carl was an extremely kind, reliable, generous man. This was greatly appreciated by Peggy’s family as he insured her health needs were always met. Carl’s family wishes to extend a special thank you to the wonderful staff at Mill Creek Memory Care, especially Kelly Stone, for their compassionate care.

Graveside services and military honors will be held at 11:00 AM on Thursday, September 22nd at Northland Chapel Gardens, with Deacon Louie Londo officiating.