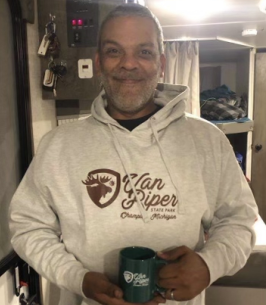 Don J. Williams, Jr., 48, of Ishpeming, passed away unexpectedly of natural causes at his home on Thursday morning, August 11, 2022.

Don was born February 20, 1974 in Marquette to Donald Williams, Sr. and Jean Morris, and was lovingly raised by his mother and his grandmother, Evelyn Morris. He attended Marquette Senior High School and was a lifelong area resident. Don was proud to be the primary homemaker and adored being able to take care of his children while his wife pursued her career.

In his spare time, Don loved camping with his family, especially at Van Riper State Park, loved listening to music and was a fan of Michael Jackson. More than anything, Don was a family man who truly cherished being with his wife, children and was such a proud and loving grandpa.

Surviving are his loving wife of 24 years, Hailey (Orr) Williams; his sons, Jesse and Riley Williams, both of Ishpeming; his two daughters, Kiya (Joe LaCasse) Williams of Lake Linden and Eliza Williams of Ishpeming; his beloved grandson, Leo LaCasse; his father; and numerous brothers, sisters, brothers and sisters-in-law, nieces, nephews and cousins. He was preceded in death by his mother; and grandmother, Evelyn Morris.

Honoring Don’s wishes, no public services will be held.

Mr. Williams’ memorial page may be viewed at koskeyfuneralhome.com