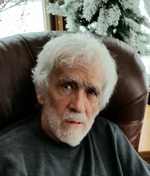 Clifford Dwight Nelson, 87, of Negaunee, passed away peacefully the morning of May 20, 2022 with his wife and daughter, Cindy, by his side in the house that he built.

Clifford was born December 21, 1934 in Negaunee to Herbert and Myrtle (Mullin) Nelson.
He graduated from Negaunee High School, Class of 1952 and then earned his bachelor’s degree in metallurgical engineering from Michigan Tech University. Cliff was employed by Cleveland Cliffs for 41 years, retiring June 30, 1997.

Clifford married the love of his life, Nancy Lindstrom, on October 8, 1955 at Mitchell United Methodist Church in Negaunee. They loved having young children in the house, so in addition to raising their four children, they fostered 69 children.

He was preceded in death by his son and daughter-in-law, Clifford (Lisa) Nelson, Jr. and his beloved pet Cuty Rae.

Honoring Cliff’s wishes, no public services will be held. Interment will take place in the Negaunee Cemetery.

Mr. Nelson’s memorial page may be viewed at koskeyfuneralhome.com.