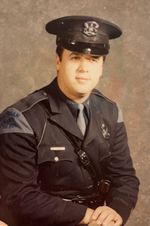 Gary was Born May 27, 1947 in Hancock to Donald and Elizabeth ‘Peggy’ (Heath) Taskila and graduated from Negaunee High School, Class of 1965. He was united in marriage to his high school sweetheart, Trudy Pascoe, on December 18, 1965 at Mitchell United Methodist Church in Negaunee.

Gary will always be remembered for his jokes, stories and as the life of the party. He enjoyed playing cribbage, pinochle and going to the VFW for coffee with the guys. He loved camping, hunting, and was an avid Detroit Lions and Tigers fan.

Gary started working at Negaunee Home Bakery at age 12, and worked many jobs there through his senior year of high school. Following graduation, he moved to Detroit and worked for Chrysler before moving back to Negaunee and working at the Empire Mine. When Gary turned 21, he joined the Michigan State Police. He served at Ionia, Bay City, Detroit, Northville and Negaunee Posts, retiring in 1994 as a Detective Sergeant with 25 years of service. Following retirement, he worked at the Baraga Prison as a fire safety officer.

Mr. Taskila was a member of Mitchell United Methodist Church, life member of the Negaunee VFW Auxiliary and the Negaunee Eagles. He and his wife enjoyed 15 years wintering in Zephyrhills, Florida until his health declined.

A Celebration of Life and luncheon will be held from 2:00 PM until 4:00 PM on Saturday, May 28th at the Negaunee VFW.

Gary’s memorial page may be viewed at koskeyfuneralhome.com.