To share your memory on the wall of WAYNE CONNORS, sign in using one of the following options:

Wayne was born April 1, 1932 in McFarland to Desmond and Dorothy (Larsh) Connors and graduated from Gwinn High School, Class of 1950. He left a full scholarship to Northern Michigan University to join the United States Air Force during the Korean War. He served with the 33rd Air Regiment, Okinawa, until his honorable discharge in 1955. Following his service to his country, he married the love of his life, Joann D. Harju on June 29, 1957, and together they enjoyed over 63 years of marriage. Wayne was employed as the general manager of Interstate Valweld, retiring with over 34 years of service with the company.

Mr. Connors was a member of Immanuel Lutheran Church, Negaunee, and was a lifetime member of AMVETS. He was a proud member of the 100pint blood donation club with the American Red Cross. In his spare time, he enjoyed playing cards, especially cribbage, and loved being in the woods and going to hunting camp. Most of all, he was a loving and devoted patriarch to his family. He worked hard to build a family camp on Lake Sixteen in the Champion/Michigamme area, and was gratified to be able to give the camp to his children for the next generations to enjoy.

He was preceded in death by his parents; a granddaughter, Shannon Liquia; a sister-in-law, Sharon Connors; and brothers-in-law: Ed Marjonen, Bob Boogren and Martin Kotel, and Johnny Roberto.

Funeral services will be held at 11:00 AM on Saturday, May 1st at Immanuel Lutheran Church, Negaunee, with Rev. Steven Solberg officiating. Burial will be in Northland Chapel Gardens. The family will greet relatives and friends from 9:30 AM until the time of services at 11:00 AM at the church on Saturday. Pallbearers are Randy, Ricky and Rodney Champion, John Cass, Jr., Tracy Schmeltz, Joe Boogren and Wayne Champion. In lieu of flowers, memorial contributions may be directed in Wayne’s memory to the Fortune Lake Scholarship Fund.

For those unable to attend, funeral services will live streamed, and can be launched through www.immanuelnegaunee.org

Wayne’s memorial page may be viewed at koskeyfuneralhome.com
Read Less

To send flowers to the family or plant a tree in memory of WAYNE CONNORS, please visit our Heartfelt Sympathies Store.

We encourage you to share your most beloved memories of WAYNE here, so that the family and other loved ones can always see it. You can upload cherished photographs, or share your favorite stories, and can even comment on those shared by others.

Scott, Diane, and Matt Jandron and Alison and Denise Connors and family sent flowers to the family of WAYNE CONNORS.
Show you care by sending flowers

Posted May 02, 2021 at 06:00pm
So sorry for your lost. He was always good to me
Always a smile on his face
Prayers 🙏 for healing for your family. Lucy H.
Comment Share
Share via:
DM

Posted May 01, 2021 at 01:32pm
To the Connors Family: We were so sad to here about Wayne. He was always so sweet at every family reunion. My parents, Gladys and Albert, so enjoyed his company. I would always tell him he looked like my brother Maury. Sorry we are unable to attend funeral. I know he was surrounded by loving family and you will all carry wonderful memories in your hearts. Deb (Morin) and Les Rolig
Comment Share
Share via:
SJ

Posted Apr 29, 2021 at 05:04pm
He will always be Papa Wayne to me and my family. He was my son Matt’s bonus grandpa when he was growing up. We were blessed to live across the street from Papa Wayne and Joann for all those years. I will be forever grateful to him for the love he showed my son.
Comment Share
Share via:
SJ

Posted Apr 29, 2021 at 04:13pm
Thank you for your service to our country. We will also be forever grateful to you for all that you did for Matt while he was growing up.

Flowers were purchased for the family of WAYNE CONNORS. Send Flowers 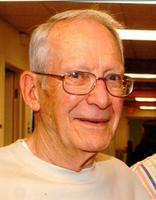