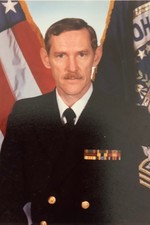 Michael was born February 14, 1949 in Ishpeming, to Joseph and Marie (Larch) Kratz, and graduated from St. Paul High School, Class of 1967. Following graduation, he joined the U.S. Navy. After serving 26 years of service to his country, Michael retired as a Navy Chief in 1997. During his time in the Navy, Mike earned the Navy Achievement Medal, Navy Unit Commendation (2), Meritorious Unit Commendation (2), Navy Expeditionary Medal, Navy National Defense Service Medal (2), Vietnam Service Medal, South West Asia Service Medal, Sea Service Deployment Ribbon (2) and the Navy Overseas Service Ribbon. After retirement, he remained in Jacksonville where he continued his career in a civil service government position until finally retiring for good in 2020.

Mike was a life member of VA Romo Post #3165, Negaunee VFW. He was an avid Green Bay Packers fan, enjoyed going to the flea market every weekend, spending time out in his garage, and he looked forward to returning to the U.P. every summer to spend time with his family.

He was survived by his wife, Gaye Kratz, who passed away on April 11, 2021. Surviving are his sisters: Renae (Tom) Petrocik, Patti (Doug) LaFond and Lori (Dan) Skytta; his brother, Dennis (Kathy) Kratz; sister-in-law, Linda; several nieces and nephews; several great nieces and nephews; his step-granddaughter, Jessica Aguilar; and his best friend, Bill Watson of Tallahassee, FL.

He was preceded in death by his parents; and his brothers, Joseph “Butch” (Barb) Kratz and Gary Kratz.

Honoring Mike’s wishes, no public services will be held. In lieu of flowers, memorial contributions may be directed in his memory to the Negaunee VFW.

Michael’s memorial page may be viewed at koskeyfuneralhome.com