To share your memory on the wall of ROBERT PARKKONEN, sign in using one of the following options:

Print
Robert John Parkkonen, 45, of Holland, MI and former Marquette resident, passed away at his home Friday evening, April 2, 2021 due to complications from COVID-19.

Rob was born December 17, 1975 in Ishpeming to Gary and Vicki (Pearce) Par... Read More
Robert John Parkkonen, 45, of Holland, MI and former Marquette resident, passed away at his home Friday evening, April 2, 2021 due to complications from COVID-19.

Rob was born December 17, 1975 in Ishpeming to Gary and Vicki (Pearce) Parkkonen and graduated from Marquette Senior High School, Class of 1994. He continued his education at Northern Michigan University, earning his Bachelor’s Degree in Mechanical Engineering. He was employed as a design engineer for Automated Machine Systems in Jenison, MI.

Rob was a kind and gentle person who loved his family and friends. He enjoyed snowmobiling, fishing, skiing and other outdoor activities. He especially loved going to Skeeter Camp and catching rainbows on Little Shag with his family. He enjoyed family trips, mom’s lasagna dinners, boating with his sister, and spoiling his little niece, Anna, who he nicknamed ‘Neeners.’

Rob’s biggest passion was music. He was an excellent drummer, a natural from the start. He took to his drums and found his beat, a beat so strong it would carry him to wherever he would go. Rob became proficient in many styles of music including Jazz, Latin, Reggae, Funk, Metal and even good ol’ Rock and Roll. He played in various bands in the UP, many times traveling to gigs with his dad and many great musicians. Rob later played in several bands in the West Michigan music scene after moving to Holland. He will be sorely missed by all of his musician friends and fans.

In accordance with COVID-19 precautions, private family services will be held. As an expression of sympathy, the family wishes that everyone please take a moment to get your COVID-19 vaccination as soon as it is available to you. Protect yourself and your loved ones.

Perhaps Rob’s niece, Anna, said it best… “It will never be the same.” Rob, we love you and miss you so much, you will remain in our hearts forever. May we all find peace in God’s creation ‘til we meet again.

Rob’s memorial page may be viewed at koskeyfuneralhome.com
Read Less

There are no events scheduled. You can still show your support by sending flowers directly to the family, or planting a memorial tree in memory of ROBERT JOHN PARKKONEN.
Plant a Tree

We encourage you to share your most beloved memories of ROBERT here, so that the family and other loved ones can always see it. You can upload cherished photographs, or share your favorite stories, and can even comment on those shared by others.

Posted Apr 16, 2021 at 02:32pm
I watched Rob grow up from a baby into a talented musician and a great young man. His loss is tragic. I send my deeoest sympathies to Gary and Karen, Vicki, and Lindsey as well as their extended families. Rob will truly be missed. Please get your Covid vaccinations and wear a mask.
Comment Share
Share via:
GC

Posted Apr 15, 2021 at 04:30pm
I got to know Rob when he was working as designer/drafter many years ago. He was also a classmate of my niece and there was a musical connection there from earlier. From the times I saw Rob on stage before he moved downstate, he had developed into a very solid percussionist w/excellent timing & technique. I was very saddened to hear the news which I will pass on to my niece in Virginia. Extending heartfelt condolences to Gary & family.
Comment Share
Share via:
JB

Posted Apr 15, 2021 at 10:34am
I am so sad to hear of Rob's death from this horrible disease. Too young and too talented to be go be so soon.
Comment Share
Share via: 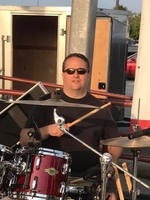 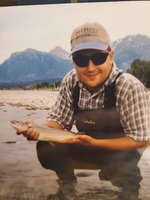