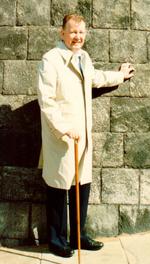 Bob was born July 7, 1929 in Negaunee to Arthur and Lila (Alongo) Mager and graduated from Negaunee High School, Class of 1948. Following graduation, he served in the United States Army in Japan, being honorably discharged in 1950.

Mr. Mager was employed as an electrician for Cleveland Cliffs Iron Company. Prior to his CCI employment, he served as a police officer for the City of Negaunee. Bob was a member of Immanuel Lutheran Church, Negaunee and was a 32nd Degree Mason. Most important to him was spending time with his beloved family.

Bob’s family extends a heartfelt thank you to the staff at MCMCF for their compassionate care provided.

Honoring Mr. Mager’s wishes, no public services will be held. His memorial page may be viewed at koskeyfuneralhome.com