To share your memory on the wall of ELVIRA MOUSER, sign in using one of the following options:

Print
Elvira Angelina (Terzaghi) Mouser of Orange County, CA, died at the age of 95 in Fullerton, CA on Sunday, January 3, 2021.

Elvira was born on April 20, 1925 in Negaunee to parents, David and Virginia (Sghirinzetti) Terzaghi. Her mother w... Read More
Elvira Angelina (Terzaghi) Mouser of Orange County, CA, died at the age of 95 in Fullerton, CA on Sunday, January 3, 2021.

Elvira was born on April 20, 1925 in Negaunee to parents, David and Virginia (Sghirinzetti) Terzaghi. Her mother was pregnant with her while immigrating from Italy to America. Born weighing four pounds, Elvira was placed in a bread box near the fireplace as a makeshift incubator.

Her early years were spent in Negaunee, an iron ore mining community. Elvira excelled in her studies at Negaunee St. Paul High School. Her natural physical strength and flexibility were demonstrated in cheer leading. She spoke only Italian until age 12 but taught herself English, becoming equally fluent in both languages. Her early challenges with learning English inspired her to make it her major at the University of Michigan, after which, she was top of her class at the University of California, Hastings College of the Law, San Francisco. She worked at Chrysler to fund her schooling and sent money home to her parents.

Elvira married John Edwin Mouser, a lawyer, on May 31st, 1952. She left law school to raise her three daughters and son. Elvira was never one to sit still, seeing every moment as an opportunity to be productive, learn something new or help others. In addition to being a devoted mother, wife, and gifted cook, she managed properties and came to the aid of anyone in need. Even in her older years she tended to the elderly. She had a zeal for life, traveling the world and utilizing her knowledge of many languages including Spanish and Latin. She loved to read and listen to classical and opera music. While in college her favorite subject was geology and plate tectonics.

She was fueled by her faith in Christ and showed His love to anyone she met. People were greeted with her warm smile, huge embrace and a big kiss on both cheeks.

Surviving are her four children: Clelia Mouser, Julia Lemberg, Virginia Eames, and son, John Mouser (JK); four grandchildren: Steven Terzaghi and Ashley, Megan, and David Mouser; her sister, Shirley (Edward) Schaffnit of San Francisco; and many nieces and nephews. She was preceded in death by her parents; her brother, Johnny Terzaghi; and her sister, Clelia Terzaghi.

Elvira was a remarkable woman who will be greatly missed by all who knew her.

Private graveside services will be held at the Negaunee Cemetery, with Rev. Larry Van Damme, Pastor of St. Paul Church officiating. She will be laid to rest next to her parents as she had wished.

There are no events scheduled. You can still show your support by sending flowers directly to the family, or planting a memorial tree in memory of ELVIRA ANGELINA MOUSER (Terzaghi).
Plant a Tree

We encourage you to share your most beloved memories of ELVIRA here, so that the family and other loved ones can always see it. You can upload cherished photographs, or share your favorite stories, and can even comment on those shared by others.

Love and endless gratitude,
you were missed long before this,
Marcia Terzaghi

Posted Jan 10, 2021 at 04:57pm
My Aunt Elvira was a deeply giving, noble soul. She exuded grace & dignity at all times. Her willingness to reach out & assist others was endless. May she rest in everlasting peace. With love in my heart, Julie Terzaghi Landis
Comment Share
Share via: 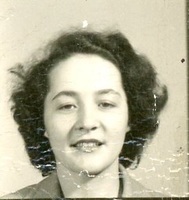