To share your memory on the wall of CHARLES FRASSETTO, sign in using one of the following options:

Print
Charles Bruno Frassetto, 89, longtime Gwinn resident, entered eternal life on December 29, 2020 at his daughter’s home in Rochester Hills while in the care of his loving family and hospice.

Charles was born November 4, 1931 in Negaunee... Read More
Charles Bruno Frassetto, 89, longtime Gwinn resident, entered eternal life on December 29, 2020 at his daughter’s home in Rochester Hills while in the care of his loving family and hospice.

Charles was born November 4, 1931 in Negaunee to Oscar and Paula (DelSasso) Frassetto and graduated from Negaunee St. Paul High School, Class of 1949. Charles was a proud veteran of the United States Marine Corps, having served during the Korean War.

Following his service to his country, Charles used his GI bill to attend Northern Michigan University where he earned his Bachelor’s degree and later his Master’s degree in Music education. He met Nancy Marie Dowrick at the Ishpeming City band practice in 1954. They married on July 21, 1956 and celebrated 64 years of marriage this past July. He initially taught in Lake Linden and Stephenson before moving to Gwinn in 1964 where he taught band for the remainder of his career.

Charles was a member of St. Anthony Catholic Church, Gwinn; The Knights of Columbus, The Gwinn Male Chorus which he directed for many years, Allegro (coed group that put on musical shows) and The American Legion, Little Lake where he spent years making pasties for fund raising. He also sang in the church choir at St. Anthony’s. He greatly enjoyed woodworking and all of his family and numerous friends have his beautiful shelves with wall hanging quilts made by his wife. He also played Taps on Memorial Day and for Veterans’ funerals for many years.

He was preceded in death by his parents; his brothers Mario (Gloria), Johnny (Aino) and nephew James Frassetto.

In accordance with COVID-19 precautions, a Mass of Christian Burial will be celebrated at St. Anthony Catholic Church in Gwinn at a later date. Interment will take place in the Negaunee Cemetery.

There are no events scheduled. You can still show your support by sending flowers directly to the family, or planting a memorial tree in memory of CHARLES BRUNO FRASSETTO.
Plant a Tree

We encourage you to share your most beloved memories of CHARLES here, so that the family and other loved ones can always see it. You can upload cherished photographs, or share your favorite stories, and can even comment on those shared by others.

Posted Jan 12, 2021 at 08:52am
Nancy and family, just wanted to let you know that we are keeping you all in our thoughts and prayers at this time of loss. We will always remember Chuck for the MUSIC that he loved and promoted throughout his life! We all have had a chance to enjoy that music and friendship, Chuck is greatly missed! God's Grace to all of you.
Paul & Rosie King
Comment Share
Share via:
DB

Posted Jan 05, 2021 at 04:49pm
Sorry to hear about Charles. Condolences to Nancy and family. I was in Allegro with Charles and Nancy for a couple of years, I have remarried and am living in Livonia, MI now.
Comment Share
Share via:
M

Posted Jan 04, 2021 at 11:13am
Mr. Frassetto was my Band teacher in elementary and middle school, but he was also my friend's dad. I spent a lot of time at their house and, over the years, visiting with him and his family. He was a very kind and friendly man who had a nice sense of humor. I will always remember smile. He was a wonderful man who will be greatly missed. May his family find some comfort in knowing he was loved by so many people. Eterno riposo in pace. 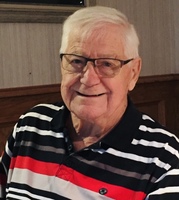