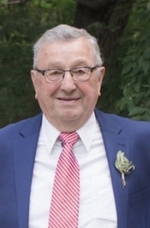 William Louis ‘Bill’ Stine, 85, of N. Maple St., Gwinn, passed away peacefully Tuesday evening, November 3, 2020 at his home with his loving family at his side and under the care of Lake Superior Life Care & Hospice.

Bill was born May 7, 1935 in Princeton to Joseph Stine & Mary (Taccolini) Barlow, graduated from Gwinn High School, Class of 1953 and was a lifelong Gwinn resident. He married Patricia ‘Patty’ Erickson on November 24, 1955 and together they raised their three children. Bill worked for a year in California before returning to Gwinn where he spent a majority of his working years as a lead lineman for UP Power Company where he worked until his retirement in 1993.

In his spare time, Bill was an avid hunter and a longtime fast pitch softball pitcher for Jack’s Hideaway, where he and his teammates, many of whom were his brothers-in-law, won several U.P. titles.

Surviving are his loving wife, Patty Stine of Gwinn; three children: Chip (Mary Lane) Stine of New Bern, NC, Sharleen Stine of Marquette and Gary (Linda) Stine of Menominee; 9 grandchildren; 17 great-grandchildren; and a brother, Louis Barlow of Jamestown, OH. He was preceded in death by his parents.

Honoring Bill’s wishes, private services will be held at a later date. Interment will be in the Gwinn Cemetery.

Mr. Stine’s memorial page may be viewed at koskeyfuneralhome.com