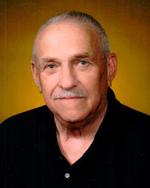 Mr. Carlson’s memorial page may be viewed at koskeyfuneralhome.com