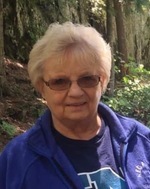 Marjorie was born October 16, 1948 in Ishpeming to Arvo Sippola and Louise (Peterson) Vizena. Her father died just short of her fourth birthday, and she was raised by Louise’s second husband, Robert ‘Crow’ Vizena. She was a graduate of Negaunee High School, Class of 1966 and was a lifelong Negaunee resident. Marjorie married David J. Healey on May 3, 1969, and together they raised their two sons. She was employed locally at a number of medical offices as a receptionist.

Mrs. Healey was a member of Immanuel Lutheran Church, Negaunee. She loved spending time at the Ishpeming Elks making pasties where she had numerous friends.

In her spare time, Marjorie enjoyed spending time with her husband and two sons. She was a Green Bay Packer fan and watched them often. Marjorie spent most of her free time at her family camp in Republic, where they had fires and often went for rides looking for moose, deer, and bear. She loved walking her dog Magee and going to Green Bay to watch over her grand dog, Duke. The holidays were a time she relished spending time with friends and family and spoiling them.

She was preceded in death by her biological father, Arvo Sippola; her mother, Louise Vizena; her father in-law, Joseph Healey; and mother in-law, Jeane Healey.

A private graveside service for Marjorie will be held at the Negaunee Cemetery.

Mrs. Healey’s memorial page may be viewed at koskeyfuneralhome.com