To share your memory on the wall of CAROLYN COLEMAN, sign in using one of the following options:

Print
Carolyn Joan (Maki) Coleman, 71, of Negaunee Township, passed away Sunday morning, July 5, 2020 at her home in the loving care of her daughter and son-in-law.

Carolyn was born March 30, 1949 in Negaunee, to Arvo and Esther (Luhti) Maki,... Read More
Carolyn Joan (Maki) Coleman, 71, of Negaunee Township, passed away Sunday morning, July 5, 2020 at her home in the loving care of her daughter and son-in-law.

Carolyn was born March 30, 1949 in Negaunee, to Arvo and Esther (Luhti) Maki, attended Negaunee schools and was a lifelong area resident. She worked taking care of people most of her life. Whether as a waitress, bartender or Certified Nurses Aide at Mather Nursing Center which she did for much of her early life. Once she had her daughter, Coral, she took an extended time off to raise her and take care of her failing father, Arvo, prior to his time in a nursing home. When her daughter was old enough to go to school for a full day, and her husband, Ralph was forced into a medical retirement from the City of Negaunee, Carolyn went back into the work force. She found going back to CNA work was not an option since she could no longer pass the physical due to back issues. Still determined to work she started a new career path as a Community Marketing Representative for Burger King. This is where many may remember her hosting birthday parties, bringing ‘Snuffy the Fire Prevention Engine’ into their schools, bringing dressed characters such as, ‘The Burger King’ himself or ‘Rodney the Reindeer’ to area events and parades or more over running the "Whopper Hopper" in the summer at many areas throughout the community. After her extensive stint with BK she left for another job opportunity taking care of people, this time with Marquette General Home Health and Hospice. Here she traveled the UP going from home to home caring for individuals and building relationships. In fact, it was at this job that she ended up working side by side with her daughter. From home health she transferred into the hospital to work in housekeeping to minimize her road travel. In 2007, she left MGH but still didn't feel quite finished with caring for others. She took on private clients for in home care in the evenings, meanwhile her days were spent working for the Ishpeming School District as a morning and afternoon aide. Here she helped kids off the bus, and monitored the lunch room and the playground times. Carolyn was always busy with people and built many lasting relationships in each and every avenue she traveled down. She finally fully retired in December, 2013. Her time wasn't fully done caring for others though. Within a couple weeks she was taking care of her daughter after a nasty car accident. They would joke it was the blind leading the blind but with their ‘Coleman Persistence’ they made it through, along with the help of Coral’s husband, Brad.

Mrs. Coleman was a current attendee of Crossbridge Chuch, Ishpeming. In her spare time, she enjoyed doing crafts such as knitting or crocheting, building puzzles or working a good crossword puzzle or sudoku. Earlier on she was part of the township women's auxiliary that organized and held the Fall Craft Bazaar at the township hall. Some may be able to recall her doing entertainment during the bazaar as she dressed up as Frosty the snowman and did a dance throughout the aisles and handed out candy canes. She also was very involved with the church she formerly attended, The Good News Assembly of God, Ishpeming, where she taught a Bible class called Rainbows, for children 3-5 years old. It was there that what used to be thought as punishment for ill behaved children to sit on teachers lap became a badge of honor and status. It has become clear she loved caring for others. With this in mind she cared for her father when he became to sick to live on his own. She moved him into her families home and cared for him until it was clear he needed futher extensive help which led to the decision to bring him to a nursing home. Later on when her husband Ralph would be sick and require assistance and care after many different hospitalizations she again would make sure she was available to care for him in what ever capacity was needed. This is one of the main lessons she taught her daughter, family takes care of family and people take care of people.

Surviving are her daughter, Coral (Brad) Werling of Negaunee Township; a sister, Charlene Morgan; and numerous nieces, nephews and cousins. She was preceded in death by her parents; her loving husband, Ralph in 2004; three brothers: Raymond, Kenneth and Clyde Maki; two sisters, Judy Lihtinen and Irene Sawyer along with a few neices and nephews.

A Celebration of Life will be held at Crossbridge Church, Ishpeming, on Thursday, August 20th. The family will receive family and friends starting at 2 pm, with a small informal service to follow at 3 pm. The service will also be livestreamed through the Church's YouTube channel as well as simulcast on Facebook. Links will be provided on Carolyn’s Memorial page through koskeyfuneralhome.com
Read Less

There are no events scheduled. You can still show your support by sending flowers directly to the family, or planting a memorial tree in memory of CAROLYN JOAN COLEMAN.
Plant a Tree

We encourage you to share your most beloved memories of CAROLYN here, so that the family and other loved ones can always see it. You can upload cherished photographs, or share your favorite stories, and can even comment on those shared by others.

Posted Jul 08, 2020 at 11:44am
We were so sorry to hear that Carolyn had passed. She was liked by all, and always friendly and outgoing. She raised a great daughter, Coral, and supported her in all her endeavours. Carolyn will be missed by many.
Comment Share
Share via: 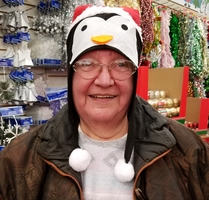