To share your memory on the wall of OLIVER KAINULAINEN, sign in using one of the following options:

Provide comfort for the family of OLIVER KAINULAINEN with a meaningful gesture of sympathy.

Oliver was born July 29, 1930 in Richmond Township to William and Hilda (Stenberg) Kainulainen and graduated from Negaunee High School, Class of 1948. He married the love of his life, Helene (Seppala) on August 15, 1953 at the Apostolic Lutheran Church in Hancock, and together they raised four boys.

Oliver worked as an automotive mechanic out of high school at several local garages. He continued his mechanic career at the Empire Mine, retiring in 1992 after 23 years of service.

Mr. Kainulainen was an active member of the Independent Apostolic Lutheran Church in Negaunee.

Oliver was a loving husband, father, grandfather, great-grandfather, brother and uncle. He enjoyed watching softball, basketball and football, especially when his children and grandchildren were playing. He loved to travel, taking numerous trips with Helene. Oliver was an avid Negaunee Miners fan, rarely missing a football or basketball game, and often times traveling in adverse weather conditions to get there. People would often joke, “Oliver’s here, you can start the game!” He also loved to watch the Green Bay Packers. Oliver had an infectious smile and a great sense of humor, and always had a joke to tell and a hug to give.

He was preceded in death by his parents; five brothers: Toivo, Urho, Paul, Eddie and Arvo; and a sister, Tyyne Mattila.

Oliver’s family would like to extend a heartfelt thank you to Dr. Wayne Carlson and to the staff at the Eastwood Nursing for their compassionate care, and also to Dr. LaBelle and Dr. Prevost for their care during Oliver’s short stay at the hospital.

A memorial service will be held at a later date at Independent Apostolic Lutheran Church, with the date and time to be announced by the Koskey Funeral Home.

Oliver’s memorial page may be viewed at koskeyfuneralhome.com
Read Less

There are no events scheduled. You can still show your support by sending flowers directly to the family, or planting a memorial tree in memory of OLIVER EDWARD KAINULAINEN.
Plant a Tree

We encourage you to share your most beloved memories of OLIVER here, so that the family and other loved ones can always see it. You can upload cherished photographs, or share your favorite stories, and can even comment on those shared by others.

Posted May 06, 2020 at 05:16am
My thoughts and prayers to Helene and the family. Oliver had a sense of humor and I had the chance to care for him while he was at his home. God Bless
Comment Share
Share via: 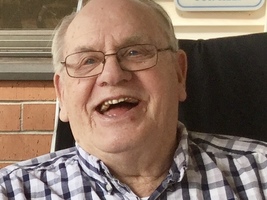