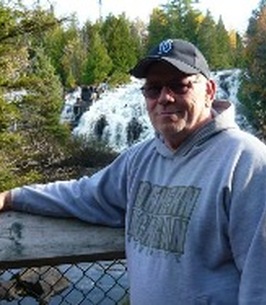 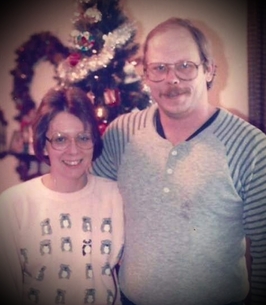 Dave was born October 25, 1951 in Bagley, Minnesota to Cloyce L. and Louise I. (Trumbull) Speaker. He grew up in Bay City, Michigan and graduated from TL Handy High where he earned several wrestling honors. A retired union carpenter, he was a grizzly bear of a man who filled up most doorways he walked through, often stopping for a back scratch on the jam. Dave, aka “Snerf,” was a fierce friend, the kind of guy you were lucky to have your back. He was a man of few words, and if he took the time to say it, it was either really important or really funny. Most importantly, he was the kind of guy who was happiest with a baby in his arms or wrestling the kids on the floor.

Dave married Vickie Linn Booth on September 13, 1975 and together they raised four children in God and love. Dave earned another title, “Grandpa” or “Papa Dave,” when his four children had nine babies of their own (soon to be ten). He was grateful to have so many babies to hold, and as they grew, a lot of grandkids to give “boots in the booty.”

Dave was a highly successful baseball coach who spent years coaching his children’s little league teams. He was the manager of the first Negaunee High School baseball team, spent time coaching the Ishpeming Blues, and was the founder of the Tri-County Northstars, the area’s first men’s baseball team which has now evolved into the Superiorland Baseball League. Dave was so much more than a coach, he was a mentor who molded girls into women and boys into men. Baseball was just the language he could speak well enough to get the job done right, and often said, “if you’re going to do it you might as well do it right.”

He was preceded in death by his parents and his dear sister, Sue Ellen.

Funeral services will be held at 3:00 pm on Friday, November 23rd at Eastwood Apostolic Lutheran Church with Rev. Dale Niskanen officiating. Interment will be in the Negaunee Cemetery. The family will greet relatives and friends from 1:00 pm until the time of services at 3:00 pm at the church on Friday, and also at luncheon reception in the church hall. Pallbearers will be David Speaker, Jr., Robert Booth, Jr. and Robert Booth, III, Steven Booth, Justin Robar, Mikel Annala, Timothy Barrette, Robert Dunning and James Larsen, II. In lieu of flowers, memorial contributions may be directed in Dave’s memory to the Eastwood Apostolic Lutheran Church or the Negaunee Little League, 409 Croix St., Negaunee, MI 49866.

We encourage you to share any memorable photos or stories about DAVID. All tributes placed on and purchased through this memorial website will remain on in perpetuity for future generations.

SS
Dear Stephanie and family,
Please except my sincere condolences and sympathy at this difficult time.

May your wonderful memories sustain you and all. Your father was an inspiring one of a kind light. He left his mark on our world helping so many kids enjoy baseball etc.

It's just so hard to lose a loved one so suddenly but that's when our faith comes in.

LL
My brother and I have been exchanging our most valued memories of Uncle Dave. In addition to the ones that Al posted below, I wanted to write a few of others: 1. In general when Alex and I were really young and needed to be babysat, I remember Uncle Dave telling jokes and watching TV with us over their house. It was a always a good time when he was around, and that great humor and relaxed feeling he brought around never changed. 2. At (cousin) David’s bachelor party I spent most of the night talking with Uncle Dave over a few beers. We had this deep conversation for long time. He told me past stories about the family I didn’t know, times before I was born. I felt like I really got to know him then, and got to connect with both him and my family’s past as I was growing up to be more of an adult. 3. I also really felt close with him these past few years when he would show me his guitars. He’d talk about them one by one as I’d get to play them. He clearly cherished them, and seemed really happy to show them to me. I loved it. He even taught me really useful things about caring for my own guitars that I didn’t know. I just remember being so glad he and I had something in common to connect on. After that, all our conversations at family events had this certain ease, like we really knew each other. He'll be dearly missed, and I wish I could have gotten more of this awesome quality time with him.
Luc LaFreniere - Friday November 23, 2018 via Condolence Message
Share This:

AL
These are a few of my cherished memories of my uncle.
I never liked baseball more than playing in the little field above the Speaker house with the wiffle ball and bat. No one else could make me love baseball in any of its forms like Uncle Dave.
We were all surprised and amazed to find out uncle Dave had taught himself the guitar and playing for us at Christmas last year.
I have vague but fun memories of us boys and uncle Dave in the skeleton of the cabin and treehouse the first time around and how much fun it was to just run around and watch the grown ups work on what’s now the most amazing place I can think of. He was an incredible and loving man.
Alex LaFreniere - Friday November 23, 2018 via Condolence Message
Share This:

TS
Dave was a true champion on and off the field. We wrestled together at TL Handy High School. He always was encouraging to me and the rest of the guys. He was so good to hear his encouragement again for everyone later in life on Facebook.
Tim Smith - Thursday November 22, 2018 via Condolence Message
Share This:

With great love and a heavy heart, may you always sore with the Angels .
Scott & Jennifer McKendry - Wednesday November 21, 2018 via Memorial Tree
Share This:

CP
Vicky, I am so sorry to hear of your loss. Thoughts and prayers go out to you and your family.
connie powell - Wednesday November 21, 2018 via Condolence Message
Share This:

GD
Jim and I send our deepest sympathy to the Speaker and Booth families. As was said in the obituary, Dave was a gentle giant. Hold each other tight through this difficult time. I hope the wonderful memories help to sustain you through this.
Ginny Dunn - Wednesday November 21, 2018 via Condolence Message
Share This:

LL
Dave was a wonderful person and friend to all. He always seemed to find the good (or funny) in any situation and in others. His kind heart will be missed here but Heaven has gained a joyful soul.
Linda Little - Wednesday November 21, 2018 via Condolence Message
Share This:
1
Page 1 of 1
Share
×

Thank you for sharing!

Provide comfort for the family by sending flowers.

Or use your email:

Provide comfort for the family by sending flowers.

Connect with families at their time of loss. By subscribing to email updates, you will receive two daily updates containing all new stories, photos, candle lightings, condolences, and more.